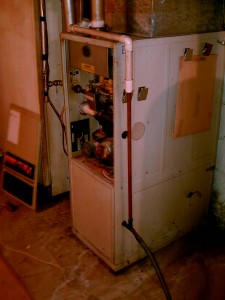 The beast of a furnace.

It was a 20 year old furnance that we had fixed from 2007 thru 2009 over 10 times. In the end we had it fixed 3 times in 2 months. We have a home warentee that will pay for fixing but not replacing. Spent over four grand for the new one. We had to save up to get the new one. You see the warentee except for the 50$/visit deductable paid for everything when they were fixing the old one. But I had to take a days pay cut since someone has to be there to get it fixed and in some cases it may be two visits over two days to get the parts to fix it, so one day I would be home, the other my wife. Lost wages anyone?

And remember when I say compeletly rebuilt I mean everything: The computer was replaced, the fan, the tubes, the gas converter thing, the condensation pan, everything execpt the casing and pipes that went outside were replaced at one point. But in the winter it would keep dying, when it was needed the most. The year of the first bad winter in the house in Feb 2010 it broke and finally we had enough saved to get a replacement.

I’m not knocking the warentee, which I still have because I like and need it it’s just that I learned that the warentee I got paid to fix but not replace which is good for some things but not others.

Oh and that four grand is only for the furnance, the AC unit would have been another four grand but it still works at this point.

Other things about the Furnance while I’m talking about it.

And that black hose was actually a cut up garden hose with electrical tape wrapped around it to keep it in place that let the condensation run on to the floor. The floor has a drain on it, but still.

Notice the new furnance all nice and shiny, it’s on a plastic block to keep it off the ground so if the celler has any shallow water leaks or what not it will safe from it.